“When they brought in a computer in ‘96 I thought that I was done; that they’d let me go and get someone who could use it. But Seetaben (former President of the cooperative) encouraged me to learn it and I learnt it within a week,”  says Jayrajben, a member of the Pethapur Mahila Dudh Utpadak Sahakari Mandali, a women-run dairy cooperative in the Pethapur village of Gandhinagar district. The cooperative is a milk collection centre for the area’s women cattle farmers, where milk is collected, tested for fat (which determines its value) and sent to larger dairies like Amul, Uttam and Madhur. Now in its 31st year, the cooperative has been successful in providing livelihoods to over 350 women. It is currently being managed by Jayrajben.

From 1971 to 1977 the area had a male-run dairy cooperative which closed down after going bankrupt. Jayrajben has been with the cooperative since its inception and had inaugurated it in 1991.  Talking about the history of the milk cooperative, she says, “When SEWA members met the sarpanch in 1991 they proposed this women-run cooperative. The sarpanch replied by saying, “If men can’t run it, how can women do it?” He eventually agreed to the proposal but expected that the new cooperative will fail too.”

Little did they know, it was going to become a source of livelihood for over 300 women cattle farmers and their families. Talking about her personal journey at the cooperative, Jayrajben says, “I had left schooling after 7th standard and was a housewife before. I had tried my hand at farming but with little success. My husband used to work in the Ambica mill at Ahmedabad until it closed down, after which we came back to Pethapur. Our sons were in the 3rd and 6th standards and we were worried about their education.”

She adds that getting work through the cooperative helped her immensely as she was able to support her children’s education. Jayrajben joined as a working mother, learnt new skills, and achieved self-reliance through SEWA Cooperative Federation’s capacity-building efforts. “Had it not been for SEWA, I never would have seen the outside world,” she said.

While her work involves managing daily operations of the cooperative, she currently also serves as a Board Member at the SEWA Cooperative Federation.capacity building

For more information on the cooperatives promoted by SEWA Cooperative Federation, read our report Advancing Cooperation Among Women Workers in the Informal Economy: The SEWA Way

स्वावलंबन / Self-reliance: A programme in overview

Self-reliance (Hindi: स्वावलंबन/swavlamban) lies at the heart of the SEWA movement and is the foundation on which the Swavlamban programme…

With the country slowly reopening and the situation returning to relative normalcy, many would think that the use of the…

Social Enterprise – Providing Employment to Strengthen the Fight against COVID-19

As the COVID pandemic continues to spread, there is an acute shortage of basic protective equipment like face masks. The…

Digital Financial services have become an undeniable need that saw a huge surge during the lockdown. However, there remains a…

The Strength of Collectives

Champaben works as a care giver for 80 year old Minalba who has limited mobility and is homebound. She has…

SEWA Cooperative Federation, in association with the National Cooperative Union of India (NCUI) and SEWA Bharat jointly organised a webinar…

Lead: A SEWA Federation collective of tribal women farmers is using Whatsapp to spread awareness about COVID-19. As the disease… 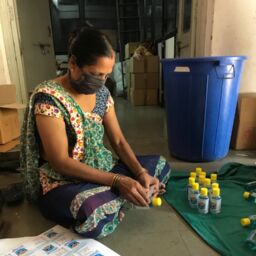 Board of Directors meets for plan and action!

SEWA Federation supports women-led collective enterprises, and is itself registered as a cooperative! Every quarter, our elected Board of Directors…

The COVID-19 pandemic has led to a surge in the use of digital tools for day-to-day tasks. The existing infrastructure…

Sangeetaben grew up in Raipur, Ahmedabad amongst three sisters and one brother.  She was sent to a hostel in fifth…

Sahinaben belongs to a household where resources are scarce. She learned of SEWA’s work from her neighbour who works at…

By Mittal Shah (In December, 2019, this article was published by the National Cooperative Union of India’s journal – The…

[…]very couple of internet sites that take place to become in depth below, from our point of view are undoubtedly nicely really worth checking out[…]

[…]we came across a cool site that you could delight in. Take a look in case you want[…]

[…]Every when inside a although we decide on blogs that we read. Listed beneath would be the latest web sites that we choose […]

[…]Wonderful story, reckoned we could combine a few unrelated data, nonetheless seriously really worth taking a appear, whoa did one particular understand about Mid East has got a lot more problerms too […]

[…]very handful of internet sites that occur to become in depth below, from our point of view are undoubtedly very well worth checking out[…]

[…]that would be the end of this write-up. Right here you will come across some web-sites that we believe youll appreciate, just click the hyperlinks over[…]

[…]we came across a cool web site that you simply may get pleasure from. Take a appear in the event you want[…]

[…]Wonderful story, reckoned we could combine a number of unrelated data, nevertheless seriously really worth taking a appear, whoa did 1 discover about Mid East has got much more problerms too […]

[…]Every after inside a even though we pick out blogs that we study. Listed beneath are the newest web sites that we decide on […]

[…]just beneath, are several totally not related internet sites to ours, nevertheless, they may be surely really worth going over[…]

[…]check below, are some absolutely unrelated internet sites to ours, however, they’re most trustworthy sources that we use[…]

[…]we came across a cool web-site which you could love. Take a search when you want[…]